Get fresh music recommendations delivered to your inbox every Friday.
We've updated our Terms of Use. You can review the changes here.

We Will No Longer Retreat Into Darkness

by The Mighty Rhino 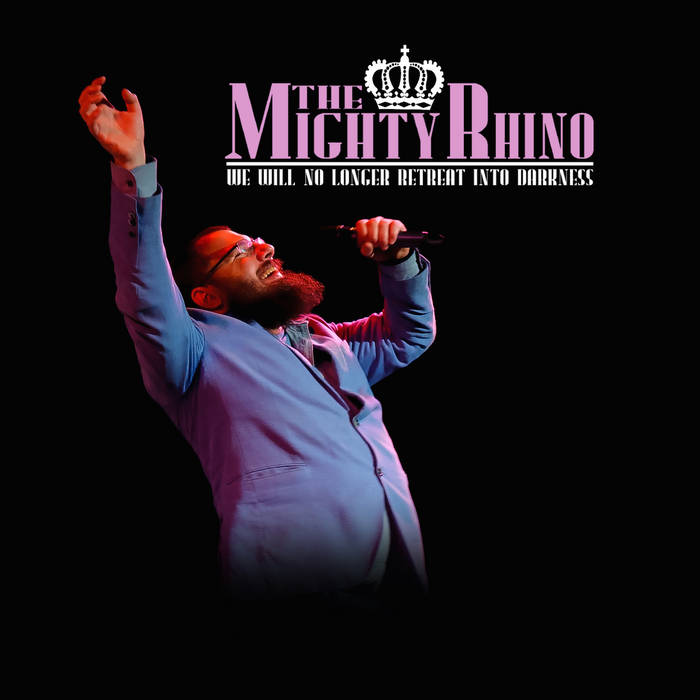 The CritIQ Sometimes, the wisest man in the royal court is the jester. While everybody else watches the throne and jostles to be the next king, The Mighty Rhino is content to be clowning on all you. An album of big hearted big sounds that should leave you with a big grin on your face.

Austerity Nissenfeld He Whom The Beat Sets Free Is Free Indeed was a promise, a covenant, from The Mighty Rhino to the world. In this his second album he honors that covenant with higher production values and smoother rhymes without sacrificing intensity and passion.

If his first offering was a sledgehammer then this is the ball-peen. A more concentrated, more precise but no less brutal blow to your ears. Rhino takes hold of the mic with both hands and delivers his truth and beauty with experience, style and grace. Favorite track: How Ya Like That (ft. Ultra Magnus & Donny Yonder).

Seven long years since his explosive debut, The Mighty Rhino returns! And what a show he’s put on for this grand second salvo. On We Will No Longer Retreat Into Darkness, Rhino is “blue suit pimpin’” at one moment and contemplating “the core realities of the universe” the next. Present here are an array of new and complex flows and powerful, emotionally potent, fascinating songs, from a breakup song that’ll rip out your heart to an interfaith gospel number that’ll make it soar. From Prince Po and Myka 9 to Adam Bomb and More Or Les to a full-blown gospel choir, the ensemble cast joining Rhino on this voyage is immaculate, but the star of the show shines all the way through, winning hearts and blowing minds yet again with his customary inimitable showmanship, piercing insight, and unforgettable style. The Mighty Rhino and Hand Solo Records are so very proud to present We Will No Longer Retreat Into Darkness, a delicious and delightful work of hip-hop art. #RhinoSalute!

Operating out of Toronto, Canada since 1996, Hand'Solo Records is devoted to releasing quality hip hop that is creative, clever and often experimental. Early releases, now out of print, include Buck 65, Sixtoo, Moka Only, and others. Currently home to Ultra Magnus & DJ SLAM!, The Mighty Rhino, The Dirty Sample, Touch, Tachichi, Primordial Emcee, royceBIRTH, 51nine02, More Or Les and Backburner. ... more

Bandcamp Daily  your guide to the world of Bandcamp